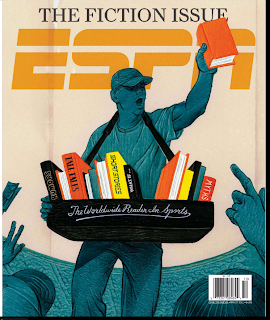 After a super busy 3 months (where were you last october?) I finally took off a whole day off to go skiing last week and nearly missed a call from ESPN to take a shot at their Fiction Issue cover. I say "take a shot", because they commission 6 artists/photographers for their covers. Which I like, since there's less pressure knowing if you air-ball your shot, there's 5 other balls in the air and somebody is going to make it. 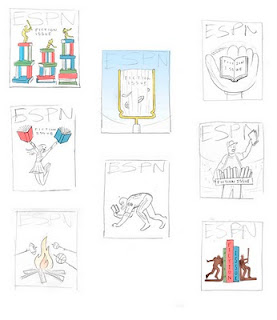 I had tried before about a year ago and didn't make it. Honestly I didn't think I had much of a chance because their covers by nature are rarely illustrated and when they are, it's vector or 3D. But since this cover was so conceptual and needed a different feel, I felt my chances were better.
When I first heard the subject "Sports Fiction" I thought what in the heck am I going to do for this! Seemed impossible, cause it's not about a specific sport, has to be general, and general is pretty hard to illustrate. But I came up with few ideas I felt could work. 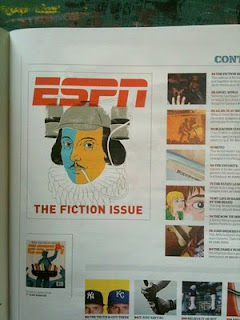 Apparently one of the other artists was Edel, who I'm sure won't mind me posting his piece, since the dang thing is funnier and more memorable than mine! I'm guessing the only reason it didn't get picked was maybe the editors thought the mag's demographic (18-30 year old males, sorry guys), wouldn't identify Shakespeare or maybe only associate him with plays. That's my guess anyway. I wish I would have thought of drawing famous writers.... maybe something with Mark Twain's likeness..... hmmm next time.

But this is another example of why illustration rocks, the solutions are so original and varied. 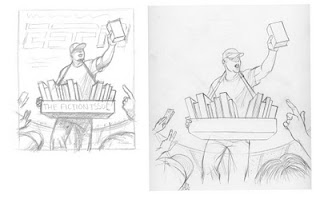 Anyway Siung Tjia, who art directed this, thought the stadium vendor guy was worth going to finish on, and he came up with the brilliant idea of putting the cover lines on the books. 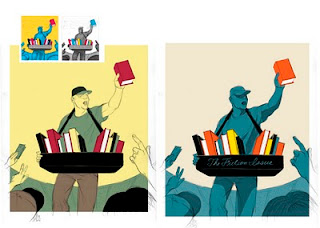 Only tricky part was he wanted me to do the type! I knew he was right and it would look better that way, but man! Me doing typography for some of the BEST typographers in the business,
freaked me out! 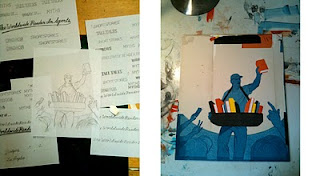 I appreciate great typography, in fact I've actually commissioned multiple art directors to do custom type for the 10 or so random splash pages on my website, but I never really studied the art myself.
And I didn't have much time, so I just stayed up hand lettering it over and over until I got something tolerable. 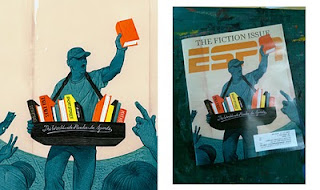