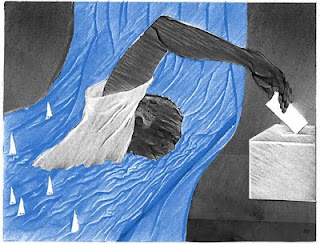 This will be for The Progressive's 2010 calendar, for the month of April.
It will be printed in 2 colors blue and black.

If you are unfamiliar with the poll tax, as I was, it was a fee to pay at the voting booth or to register to vote, basically a way to keep poor blacks from voting in the South.
I was a bit worried taking the assignment, just because the physical act of voting is so un-dynamic whereas the struggle to get there was so dynamic. 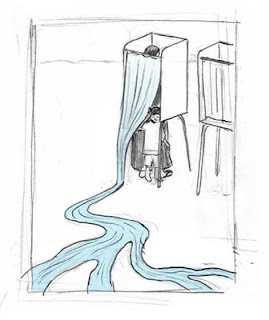 A few years ago I had done some roughs on voting in Iraq for TIME, for Edel actually when he was there, on democracy spreading in the middle east. So I think this idea of the river curtain must have come from this unused rough.

For roughs, this was all I sent the AD Nick Jehlen, a tight skethc and color study. I've never done that before, but I really liked it and wanted to see if Nick would go for it. He did. 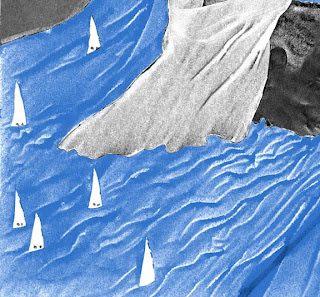 For some reason I was thinking about John Hendrix's "John Brown" book when I was drawing these little KKK hoods, maybe his really cool use of scale I don't know.
Posted by Alex Nabaum at 10:26 AM No comments: