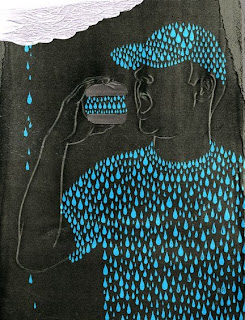 I'm always amazed, it seems the biggest way to reduce your carbon footprint AND your waterfootprint is too eat less meat. Too bad I like meat, but my wife doesn't so I'm a semi-vegetarian by default. I've gotten used to it though, and actually like it. About twice a year I'll eat a steak and it tastes good but since I'm not used to it, feels like a brick in my stomach. 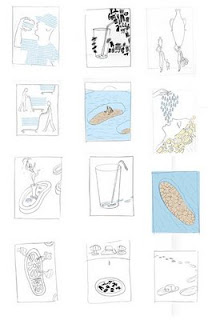 The roughs. I went alittle nuts, but I'm a sucker for environmental stories. 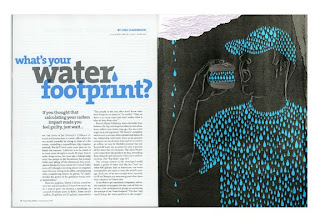 The "final". Art direction and design by Carolyn Perot.
Posted by Alex Nabaum at 2:40 PM No comments: 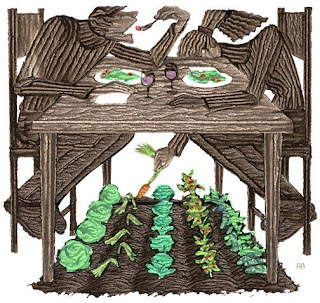 Locavores for the Boston Globe Magazine.
Art director was Grant Staublin. Who let me really push the textures on this one, which I really wanted to do so I could repeat the patterns of the rows of soil. 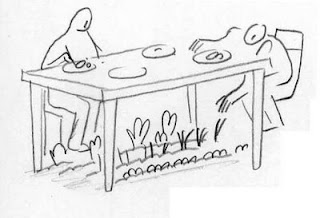 Here's the approved sketch. Grant had the idea of a family in a garden, so I compacted the space a bit. But obviously it needed a ton more work on the composition. 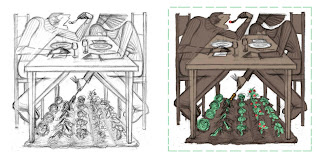 Since Locavores try to limit themselves to locally grown foods, like a 100 miles radius for example, I wanted to hint at the effort that goes into this voluntary self limiting, that why I have the figures contorting themselves into the square space. Initially I had a green dotted line around to symbolize the radius, but I dropped it. Also I don't usually stylize figures this much, but the idea called for it, and I enjoyed doing it.
Posted by Alex Nabaum at 5:08 PM 1 comment: 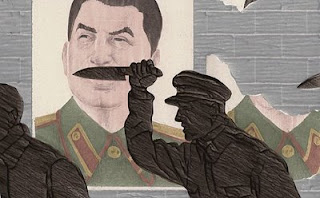 Got to take a stab at Stalin, in an illustration for the NY Times book review of "Secret Speech" by Tom Rob Smith, author of "Child 44" which is soon to be movie. Art director was Nicholas Blechman.

The novel is set during the process of de-Stalinization, set off by Khrushchev's secret speech in 1956, during which some of the hunters and executioners became the hunted and executed.

In the illustration I wanted to show the Stalin driven murders and the cycle of revenge afterward.

I'd actually had a similar idea for some personal work I've been meaning to do on the bloody history of communism. In those sketches Stalin moustache's was a grim reapers scythe which I simply switched to a knife to better fit this assignment.

So I was thrilled when Nicholas gave me the job and ended up picking that idea. 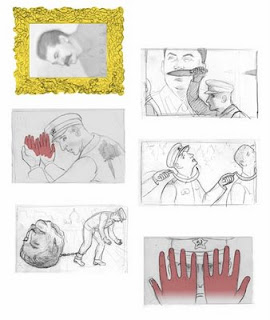 Here's the sketches, I spent a bit too much time on them, but often when I'm really loving a subject I can't help myself. 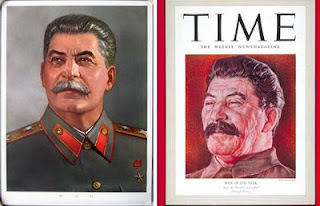 Naturally I had to base my drawing of one of Stalin's posters, but as portraits go the best I've seen is this one by Ernest Hamlin Baker on the right, which is much revealing of the true Stalin. 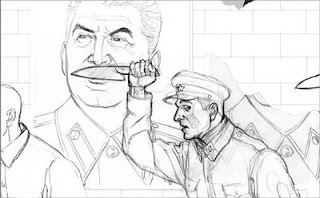 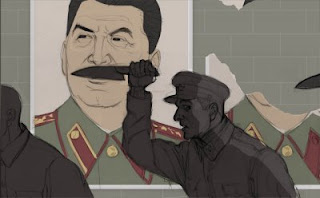 A photoshop color study. I ended up pushing more distance between the figure and the background in the final, but I'm still unsure which is better, closer and flatter or a bit more atmospheric space. 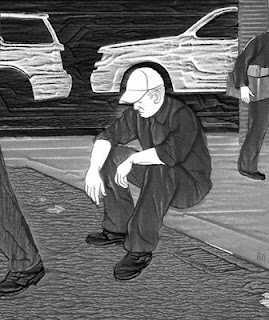 Janesville, Wisconsin a town unraveling from the closure of it's GM plant.
For the Progressive, art director Nick Jehlen. Inspiration was partly from one of my favorite Maynard Dixon paintings, see below. 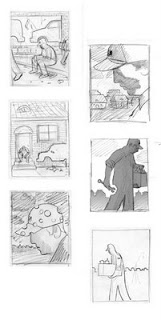 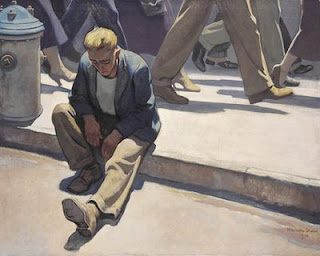