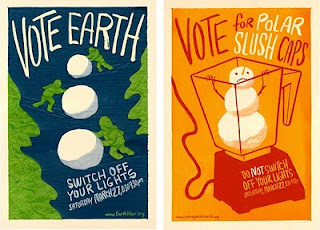 Well a record number of people turned off their lights off for Earth Hour on saturday, so bravo to everyone that remembered!
Here's my contribution to the project, a pair of pro and con postcards for the Leo Burnett agency.

Here's my favorite photo from saturday, the strip in Las Vegas, which I can really appreciate since I used to live there as a kid.
Posted by Alex Nabaum at 8:44 AM No comments: 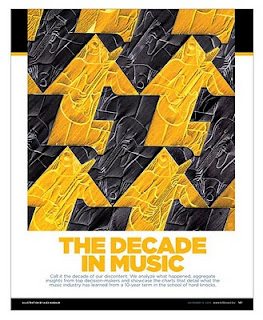 Well not really..., but lately I've come appreciate some of MC Escher's more graphic work, so I guess I'm guilty. 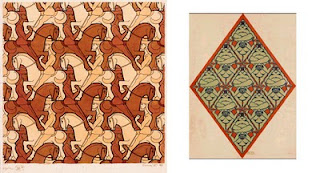 Two of my favorite Escher's.


About a year or so ago I used his technique of repetitive interlocking positive and negative space to solve a conceptual problem for Money magazine, and once you start something....

The top image is a full page for Billboard magazine. Art direction by Christine Bower. The subject was the steady decline of the music industry for a special decade wrap-up. The working headline was "Down, But Not Out". 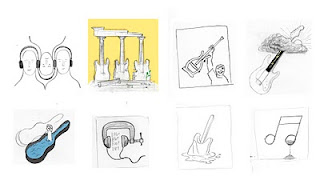 Here's some of the roughs I sent, but the editors decided they really wanted arrows going up and down. Hmmm, how to save that? 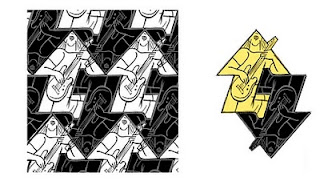 Crossed my fingers and sent in this. They went for it, which was lucky for me because it took well over a dozen sketches of puzzling just to see if it would even work as a rough. 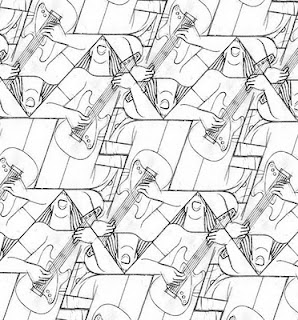 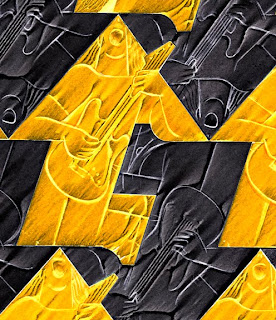 Detail, I wanted the good "up" times of the industry to feel golden, so I tried to make it feel like gold leaf.

Some other Escher riffs I've done in the past year or so. For Money, John Hopkins and TIME.

It's fun thing to try, but I don't see how Escher spent a lifetime doing it without going cross-eyed.
Posted by Alex Nabaum at 7:57 AM No comments: 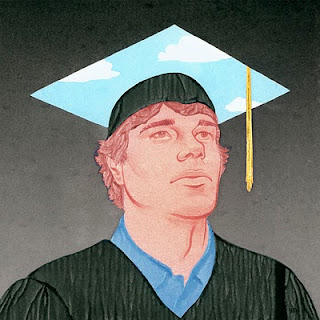 Here's two pieces I did for TIME magazine recently for Ramesh Ponnuru's column.

"Our high college drop-out rate—40% of kids who enroll in college don’t get a degree within
six years—may be a sign that we’re trying to push too many people who aren’t
suited for college to enroll."

"The tight connectionbetween college degrees and economic success may be a nearly unquestioned part of our social order. Future generations may look back and shudder at
the cruelty of it." 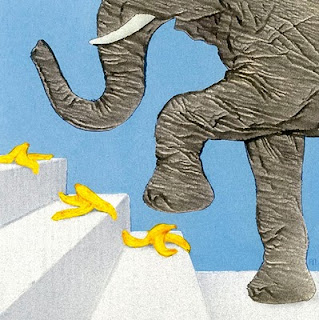 The Republican's get some lucky breaks, but the return road to power won't be easy.
Posted by Alex Nabaum at 8:32 AM No comments:

Getting Hitched Without a Hitch 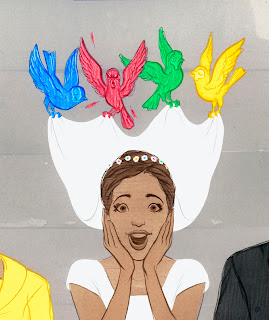 For an article about how to deal with the roller coaster of emotions that come with a wedding. For LDS Living magazine art directed by Kelly Nield at Stephen Hales Creative. 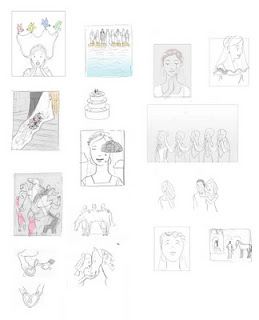 I was thinking about how a bride imagines a fairy tale wedding, but in reality the mothers could be fighting etc. etc. Then I remembered in the Cinderella Disney movie how the birds hold up her veil when she runs out of the church and thought wouldn't it be funny if the birds were fighting with each other. 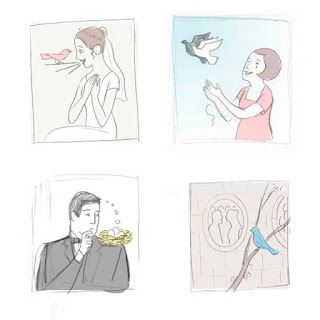 Kelly liked that direction, so I worked up some spots to go with the bird theme.

I decided the birds needed to show a wider variety of emotions. I looked at pictures of Jessica Alba when drawing the bride. 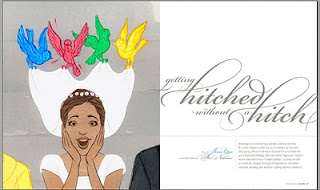 One of my favorite things about illustrating is seeing the beautiful typography right next to my piece that ties it all together so well. I love how Kelly's design echoes the curving linework of the artwork, brilliant! 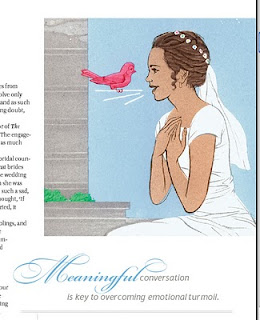 Here's a detail of one of the quarter page illustrations.

And all of them in the layout. Thanks Kelly!
Posted by Alex Nabaum at 8:05 AM 1 comment: 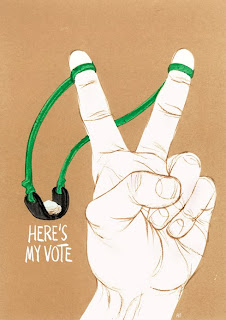 Here's my contribution to the Green Movement in Iran.
Alot of artists from around the world were invited to design a poster for the cause.
Here's all the posters

Mine is at the bottom. Since I was late in creating my poster and had watched the situation progress, I thought a different poster about turning up the "volume" might add something.

Here's some of the many color studies I did. I wanted to do a persian version, but I couldn't seem get the typography right.
Posted by Alex Nabaum at 11:46 AM 2 comments: