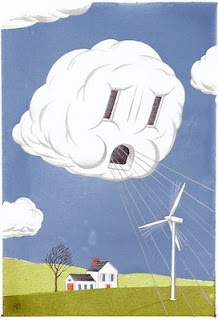 Just found out this piece I did for This Old House magazine on windpower was accepted into the editorial category of Society of Illustrators 51. Art director was Hylah Hill. 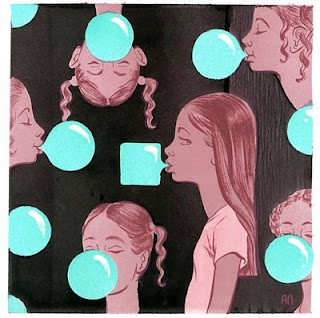 and this piece won 1st place in the 5th annual AltPick Awards. Art Director was Richard Weigand at the New York Times.
Posted by Alex Nabaum at 8:38 AM 1 comment:

For a New York Times Science article about the high school cult of popularity.
Psychologists say basically, it's good to be well-liked but bad to be super-popular
(which leads to earlier drinking, drugs, sex, etc).
Art director was Therese Shechter.

Here's the roughs, initially a horizontal space allocated, but Therese had the good idea to go vertical after she picked the totem poles sketch.

Here's the preliminary drawing, which I emailed off so Therese could get started on the layout.

My tween daughter, Aubrey hadn't left for school yet so I showed it to her, (an expert these things), and she said the girl in the middle needs to be moved to the top.

A few minutes later I get an email from Therese:
"One memory from my own miserable teen years...the girl in the middle strikes me more as a top-of-the-pole figure than the bubble gum blower you have there now. What do you think of swapping?"
Hilarious, how could I argue with that!

Posted by Alex Nabaum at 9:40 AM No comments: